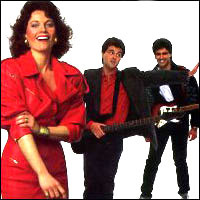 Though originally from New Jersey, Kathy Baillie and Michael Bonagura met in Delaware through a friend who gave Bonagura a tape that featured Baillie's vocals. Fans of artists like the Four Tops, the Beatles, the Supremes, Linda Ronstadt, and James Taylor, they developed a strong harmony — both on stage and off: They were married in 1977. Bonagura's buddy, bass player Alan LeBoeuf, joined up, and after a number of years on the Garden State's nightclub circuit, yet another friend — a driver with Allied Van Lines — persuaded them to join him on a trip to Nashville.
They stayed in Music City, and in 1982 they got their first chance to appear on a record, singing backup on Ed Bruce's "My First Taste of Texas." Bonagura co-wrote Marie Osmond's single "There's No Stopping Your Heart," and the trio sang backing Vocals on a number of singles for Dan Seals and Randy Travis. Ultimately, they signed with RCA Records, making their debut in 1987. After completing their second album, LeBoeuf decided their touring schedule was too hectic and left. Baillie and Bonagura retained the original name, though Boys seems a bit misleading.