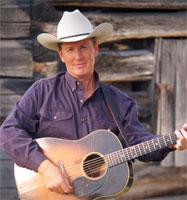 David Ball was born in Rock Hill, SC, on July 9, 1953. The son of a Baptist minister father and musician mother, Ball started playing the ukulele as a young boy, but by age 12 had switched to guitar. After high school, he and hometown friends Walter Hyatt and Champ Hood moved to Nashville, where they scraped out a living as Uncle Walt's Band. The going was tough, and eventually the trio moved to Austin, TX, hoping to find greener pastures. There Ball and his friends matured as musicians, playing covers of popular folk and roots numbers, but also writing and performing their own compositions. Ball played bass, sang lead, and also contributed backup Vocals. Uncle Walt's Band was a hit in Austin, where the music scene was more progressive and hungry young players like Lyle Lovett would pack the group's dancehall shows. The band released three successful albums before breaking up in 1983 as its members pursued solo careers.
Cut loose from Uncle Walt's Band, Ball returned to Nashville, where he gutted it out for most of the 1980s until landing a recording contract with Warner Bros. Success was quick. Thinkin' Problem, his 1994 release for the label, went double platinum and spawned three hit singles. The following year, Ball was nominated for a Male vocalist of the Year Grammy. He returned in 1996 with Starlite Lounge, which continued to display his penchant for dressed-up honky tonk. While his 1999 effort, Play, was shellacked with a Music City sheen, Ball redeemed himself with the dust-caked traditional country of 2001's Amigo, and he kept to the traditional course with 2004's Freewheeler from Wildcatter Records and 2007's Heartaches by the Number from Shanachie Records.