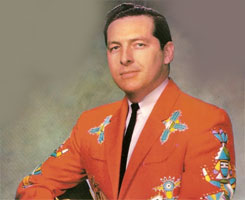 Country singer Bobby Barnett was born in Cushing, OK, in 1936, and moved to El Paso after graduating from high school in 1953. He'd long been interested in country music, and his singing career took off in 1960 thanks to a cover of Eddie Miller's "This Old Heart" that made the national Top 30. He signed briefly with Republic, which dropped him after his next single flopped, but Reprise picked him up in 1962 and issued two singles, "Crazy Little Lover" and "Same Old Love." However, it wasn't until Barnett signed with Sims in 1963 that he scored his first Top Ten hit, "She Looks Good to the Crowd." He charted several more times over the next 15 years, and his biggest subsequent single, 1968's "Love Me, Love," narrowly missed the Top Ten. Barnett's final hit was the minor 1981 comeback single "Born in Country Music."