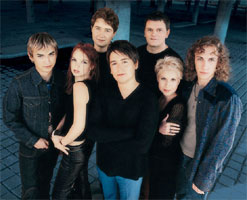 The country group Bering Strait took one of the more unusual paths to major-label status in Nashville. Natives of Obninsk, Russia, the group - consisting of Ilya Toshinsky (guitar, banjo, Vocals; born November 28, 1977), Natasha Borzilova (Vocals, guitar; born August 19, 1978), Sasha Ostrovsky (dobro, steel guitar, lap steel; born August 11, 1980), Lydia Salnikova (keyboards, Vocals; born August 10, 1980), and Alexander Arzamastsev (drums; born September 15, 1973) — was organized by a bluegrass-loving music teacher. (Sergei "Spooky" Olkhovsky [born February 15, 1978] replaced an earlier bass player, and mandolin and fiddle player Sergei Passov, an original member, dropped out after participating on their debut album.) They began to play out as teenagers and earned opportunities to visit Nashville in the early '90s. Eventually, they attracted the attention of a Nashville-based manager, who brought them over the U.S. and sought a record deal for them. They signed to Arista Nashville, but that label shuttered before they could record an album. The former head of Arista moved on to Gaylord, a start-up label, and they followed him there, recording an album with producer Brent Maher. But that association fell through, too, and it was not until January 2002 that they followed the same record executive to his next berth with the newly formed Universal South imprint of Universal. Finally, in January 2003, their self-titled debut album was released, while their travails were detailed in the 90-minute documentary The Ballad of Bering Strait.