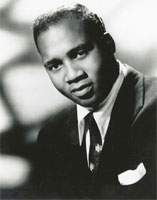 Billy Bland had a one-shot hit in 1960 with "Let the Little Girl Dance" (number seven), a pop-R&B- early soul mixture very much in the same mold as records from the period by Jackie Wilson, right down to the Latinate "Lonely Teardrops" rhythm. Some of his other singles were in the same style, but Bland (not to be confused with the unrelated Bobby Bland) was actually a pretty versatile vocalist, also purveying R&B, Bo Diddley-styled rock & roll, urban blues, and dance-craze early-'60s rock. He recorded often for Old Town from the mid-'50s through 1963, but though his range was wide, his quality was not. He was a competent journeyman no matter what his genre, never finding another song with the pop hooks of "Let the Little Girl Dance." Or writing one: though he didn't pen "Let the Little Girl Dance," he wrote much of his own material.
Bland began singing shortly after moving to New York in the late '40s, and made his first records for Imperial in New Orleans in the mid-'50s, as a member of the Bees. They did an early version of Dave Bartholomew's naughty "My Ding-a-Ling" (eventually a hit for Chuck Berry), although when the Bees did it, it was titled "Toy Bell." (It can now be found on the box set Crescent City Soul: The Sound of New Orleans 1947-1974). Bland went solo in 1955, however, beginning his lengthy association with the New York-based Old Town label. "Let the Little Girl Dance" was almost an accident: it was being recorded by Titus Turner, and Bland showed him how to do it in the studio. Unknown to Bland, his demonstration was recorded by Henry Glover, and became the hit, with guitar ace Mickey Baker playing on the session.
Bland tried to vary the "Let the Little Girl Dance" pop-R&B sound on various singles, and also ride the bandwagons of other rock trends, with no success, and made his final Old Town disc in 1963. As of the late '80s, he was running a soul food restaurant in Harlem.
He passed away on March 22, 2017 in New York City.