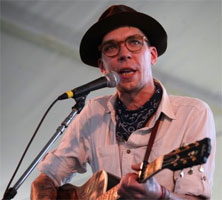 The son of maverick Texas songwriter Steve Earle (and carrying the middle name of his dad's mentor, Townes Van Zandt), Justin Townes Earle shares just a hint of his father's Vocals style in his voice, and like the elder Earle, he writes his own songs, but aside from the fact that both Earles fall to the country side of the Mason-Dixon Line, there are probably far more differences in their musical approaches than there are similarities. The younger Earle grew up in Nashville and took up music early, playing in the bluegrass/ragtime combo the Swindlers and the hard-rocking Distributors; he also toured (playing guitar and keyboards) with his father's road band the Dukes, picking up a few of the elder Earle's old bad habits in the process, but like his father, he eventually kicked his drug habit and put his life in order. Developing his own writing and playing style, a hybrid mixing folk and blues with strong early country leanings, Earle self-released the six-song EP Yuma in 2007. The release attracted the attention of Chicago's Bloodshot Records, who signed Earle and put out a full-length project, The Good Life, produced by R.S. Field and recorded at House of David Studios, in 2008. He followed it with Midnight Movies in 2009 and Harlem River Blues in 2010.
While touring in support of Harlem River Blues, Earle was involved in an altercation with a club owner after a show in Indianapolis, Indiana, which led to a brief stay in jail and a return to rehab for alcohol issues. Since then, Earle has reportedly been clean and sober, and continued to record and tour steadily. In 2012, Earle released the album Nothing's Gonna Change the Way You Feel About Me Now, and dipped his toes into production, working behind the board on Unfinished Business, an album by pioneering rockabilly singer Wanda Jackson. After Earle's contract with Bloodshot had run its course, he signed a deal with Communion Records, a U.K. label owned in part by Ben Lovett of Mumford & Sons, but the deal soon turned into a war of words between Earle and the label's A&R staff, with Earle frequently posting angry messages on Twitter about his dealings with the company. In 2014, Earle finally re-emerged with a new album, Single Mothers, which was released by the American independent label Vagrant Records. Single Mothers was recorded in tandem with a companion album, Absent Fathers, but rather than release them together, Earle decided the two sets of songs would be more powerful as separate works, and Absent Fathersarrived in January 2015. In 2017, Earle released the album Kids in the Street, his first for the respected independent label New West Records. He supported the release with a concert tour in tandem with the celebrated Canadian group the Sadies, who served as his opening act as well as his backing band. 2019's The Saint of Lost Causes was an especially atmospheric work dominated by stories of desperate characters and a nation where injustice was sadly common.
Justin Townes Earle died on August 20, 2020 in Nashville, Tennessee.