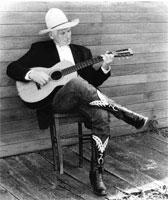 Singer/songwriter Don Edwards has dedicated his musical career to recapturing and preserving the spirit of the Old West by recording old and new cowboy songs. Almost alone in his enthusiasm when he took up the cowboy genre, Edwards by the 1990s reigned as the pre-eminent specialist in a field that had attracted many other musicians. Edwards was born and raised in Boonton, a New Jersey farming community. Inspired by the books of cowboy author Will James (such as The Lone Cowboy), he took up the guitar at age ten. He learned his first Western songs from the films of cowboy crooners Gene Autry and Tex Ritter, later discovering Jimmie Rodgers. At age 16, Edwards left home to work in the oil fields and ranches of Texas and New Mexico in order to experience the Western life and landscape firsthand.
Edwards made his professional debut in 1961 after he was hired as a singer, actor, and stuntman at the newly opened amusement park Six Flags Over Texas. He worked there for five years before moving to Nashville to seek a recording contract. Although the folk revival was in full swing, no one was much interested in Western music at the time. Edwards eventually recorded an album combining classic Western numbers with some of his own compositions on the independent Stop label. Some of the songs were played on the radio, but they never hit the charts, and Edwards returned to Texas and settled in the Fort Worth area.
In 1980, Larry Scott, a Los Angeles DJ, helped Edwards record the Happy Cowboy album, which featured backup musicians from Gene Autry's band and the Sons of the Pioneers. Edwards released the album on his own Sevenshoux label. A visit to the Cowboy Poetry Gathering in Elko, NV, in the early '80s inspired him to create a 24-song tribute to Jack Thorp, the cowboy musician who first began collecting traditional cowboy songs, on a cassette packaged with a book entitled Songs of the Cowboy. He then released a second book/cassette anthology, Guitars and Saddle Songs, and in 1990 released the album Desert Nights and Cowtown Blues.
In 1992 Edwards signed with the new Warner Western label helmed by Michael Martin Murphey and released Songs of the Trail, a spare album of traditional songs that gave the dry, melancholy, sometimes-violent narratives of the cowboy a startling immediacy. Edwards gained exposure from his major-label association and became a fixture at clubs and events with any kind of Western theme throughout Texas and the Southwest. He followed up Songs of the Trail with Goin' Back to Texas (1993), an album containing new Western songs by some of the best writers in Nashville. After West of Yesterday (1996), Edwards moved to the folk-oriented Shanachie label and continued to dip into his vast song bag of traditional Western material with the double CD Saddle Songs: Vols. 1 & 2 of 1997.
Subsequent Shanachie releases saw Edwards branching out musically even as he stuck with Western songs. My Hero, Gene Autry: A Tribute (1998) was recorded at a live appearance honoring Autry on his 90th birthday, and two years later Edwards resurfaced with Prairie Portrait, a project recorded with cowboy poet Waddie Mitchell and the Fort Worth Symphony Orchestra. Kin to the Wind, a tribute to Marty Robbins, was issued in early 2001. The 2002 project High Lonesome Cowboy teamed Edwards with folk-bluegrass singer Peter Rowan and several other acoustic-music luminaries, putting a new twist on Edwards' cowboy material. A final Shanachie project, the double-disc Last of the Troubadours: Saddle Songs, Vol. 2, appeared in 2004, followed by Moonlight and Skies on Western Jubilee in 2006.