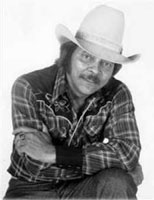 Stoney Edwards never made it to the big time, yet he and his soulful honky tonk sound had a devoted following, and he was one of the few African-American performers to try his hand in the genre. He was born Frenchy Edwards in rural Oklahoma, one of seven children. Even as a boy, Edwards dreamed of playing on the Grand Ole Opry like his hero, Bob Wills. By the time he was 13, he had mastered several instruments and frequently jammed with his uncles. After leaving home as a teen, he married in 1954 and moved to San Francisco to settle down for the next 15 years. When not working he played music. After breaking his back in a job-related mishap, Edwards was ordered to avoid heavy work by his doctors. Without an income, he seriously thought of leaving his family so they could receive welfare, but just as he was leaving his daughter came forth with the gift of wind-up toy. Deeply moved, Edwards was inspired to write his first song, "A Two Dollar Toy," and began focusing his energy on a music career.
In 1970, he was invited to play at a benefit for Bob Wills in Oakland, and his performance led to a contract with Capitol Records. The following year, he released his first album, Stoney Edwards, A Country Singer, and made his single debut with "A Two Dollar Toy," which made the Top 70. In 1972, Edwards released his second album, Down Home in the Country, and began to attract a following. "He's My Rock" came out in 1973 and stayed in the Top 20 for almost four months. Although his subsequent releases were generally minor hits, some have become regarded as country classics, such as his version of the Frazier & Owens song "Hank and Lefty Raised My Country Soul." He continued recording and appearing on the charts through the early '80s, when his career and his health began to wane. Eventually he had part of his right leg amputated due to problems with diabetes. In 1986, Edwards returned to make an album with Johnny Gimble, Ray Benson, Floyd Domino, Jimmy Day, Leon Rausch, and Ralph Mooney.