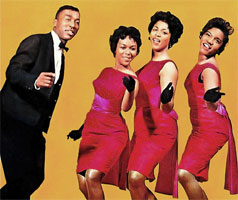 With their no-nonsense, street-smart approach, the Exciters ushered in the heyday of the girl group sound via the 1962 classic "Tell Him." Queens, NY, classmates Brenda Reid, Carol Johnson, Lillian Walker, and Sylvia Wilbur formed the group in 1961 when they were all 17 years old. Originally dubbed the Masterettes, they were the sister act to the Masters, a local doo wop quintet with the End Records single "A Man Is Not Supposed to Cry" to its credit. When the Masters secured a record deal with the Le Sage label, they wrangled session time for the Masterettes as well, and in early 1962 the group issued its debut effort, "Follow the Leader."
Wilbur left the lineup soon after, and with replacement Penny Carter, the Masterettes auditioned for the famed writing/producing duo of Jerry Leiber and Mike Stoller -- Carter's tenure with the group proved brief, however, and following creative differences with his bandmates, Masters member Herb Rooney signed on with the Masterettes in time for their first session for United Artists. Galvanized by Reid's aggressive lead Vocals, "Tell Him" -- credited to the Exciters, a moniker devised by Leiber & Stoller -- hit radio and retail in the fall of 1962, reaching the Top Five on the Billboard pop and R&B charts early the following year. Eschewing the demure puppy-love sensibilities of previous girl group records, "Tell Him" boasted an intensity that signified a sea change in the presentation and perception of femininity in popular music, paving the way for such tough, sexy acts as the Shangri-Las and the Ronettes.
the Exciters resurfaced in the spring of 1963 with "He's Got the Power" -- though as potent (if not more so) than "Tell Him," the single sputtered to a halt at number 57 on the Billboard chart, portending the commercial frustrations that dogged the group despite the uncommon quality of its output. The third Exciters single, "Get Him," climbed only as high as number 76, two spots better than its follow-up, the Ellie Greenwich/Jeff Barry-penned "Do Wah Diddy" -- British Invasion combo Manfred Mann nevertheless heard the song and recorded their own cover version, scoring an international number one smash just months later. After one last United Artists release, "Havin' My Fun," in 1965 the Exciters signed with Roulette Records to remake Frankie Lymon & the Teenagers' "I Want You to Be My Boy."
Early the following year, the group scored one last minor hit, a reading of the Jarmels' "A Little Bit of Soap," but its commercial heyday was over. the Exciters nevertheless continued recording throughout the decade for labels including Bang, Shout, and RCA Victor. Reid and Rooney, who had wed in 1964, continued leading the group long after Johnson and Walker broke ranks. After recording a handful of disco-era singles under the name Brenda & Herb, the couple finally eased into retirement. In the mid-'80s they separated, and while Rooney founded his own cosmetics firm, Reid launched a new Exciters with members of her family.