Frank Fafara was a teen rocker in the late 1950s and early 1960s in Phoenix, Arizona, where he achieved regional fame.
In the late 1950s, Frank and his school friend and lead guitarist Richard Meyer started out playing for high school rallies. Their popularity soon came to the attention of Arizona Republic music columnist Jack Curtis, who set up their first recording session. The original recording included Richard Meyer on lead guitar, Jim Schultz on drums, Frank on rhythm guitar, and Al Casey on bass.
Fafara had a string of successful Rock ‘n Roll releases in Arizona from 1959 to 1964. His first recording, “Only in My Dreams” went to #5 on the Phoenix Top Ten radio charts. A series of releases followed including “Miss You Dee”, “Lovemaker, Lovebreaker” and “Golden One”. Frank Fafara recorded at the same studio as Duane Eddy, Waylon Jennings, Sanford Clark, and Wayne Newton. Cashbox’s national review noted that “Fafara has something of the late Buddy Holly in his light beat delivery”. Billboard Magazine gave him their highest 3 star rating.
Frank Fafara performed shows across Arizona with other top rockers of his day including the Everly Brothers, Conway Twitty, Brenda Lee and Del Shannon. He also appeared regularly at Stage 7, a popular Phoenix teen club. Frank appeared as a regular on KPHO’s Saturday night TV show Teen Beat, as well as performing on the famous Wallace & Ladmo TV show. On television, Frank was usually backed up by lead guitarist Mike Condello & the Stage 7 combo, while other shows normally featured Bob Knisley or Fred Allard on lead guitar.
In the 2000s, Fafara’s masters were found along with others at Audio Recorders, the studio which made Phoenix a major recording hub during the fifties & sixties. Frank wrote all of his songs and they were put out on MCI Records and Mascot Records. The songs were leased to Del-Fi Records, the same label as Richie Valens, but were never released nationally. In 2006, all the original Phoenix recordings from 1959 - 1964 of Fafara were completely digitized and released on a CD titled Only In My Dreams.
Around the late 1970s, Fafara founded Comstock Records (generally known then as "Frank Fara"). 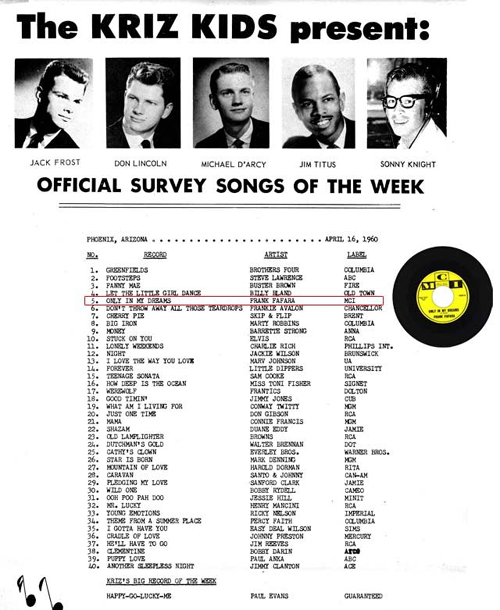