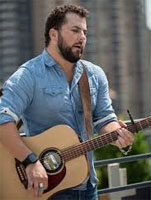 Country singer and songwriter Tyler Farr was born and raised in Garden City, Missouri. He had an early exposure to country music, thanks in no small part to the fact that his father played lead guitar in country icon George Jones' touring band, and he even accompanied his father for a summer on the road at the age of 16. The die was set, and when he was old enough, Farr moved to Nashville to try and get his own career going as an artist. He took a job as a bouncer at the legendary Tootsie's Orchid Lounge, eventually convincing management to let him sing, and he continued to sing there four nights a week while still working security at for several years. Farr's break came when Rhett Akins took an interest in Farr's songs and singing, and he ended up landing a publishing deal with Sony ATV/Monument Publishing, which in turn led him to a recording deal with Sony Music Nashville's BNA Records. A four-song digital EP, Camouflage, was released in 2010, with a pair of singles, "Hot Mess" and "Hello Goodbye," following in 2012, and another, "Redneck Crazy," in 2013.