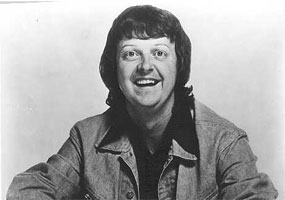 Best-known for a brief run of country novelty hits in the mid-'70s, Dick Feller was also a songwriter responsible for several hits by other artists, most notably his oftentime writing partner, Jerry Reed. Feller was born in Bronaugh, MO, in 1943, and started performing and writing in his late teens; he moved to Nashville for a brief period, then went to Los Angeles, where he played in a band and made some demos of his songs. He returned to Nashville in 1966, where he worked as a session musician and in touring bands behind Mel Tillis, Skeeter Davis, and others. Eventually, he landed a songwriting contract with Johnny Cash's publishing company, and wrote the singer's 1972 Top Five hit "Any Old Wind That Blows." The following year, Feller's "Lord Mr. Ford" -- originally written for Jimmy Dean -- became a number one hit for Jerry Reed, who quickly signed Feller to his own publishing staff; Reed went on to record numerous Feller compositions, among them "East Bound and Down" and "I'm Just a Redneck in a Rock and Roll Bar." Meanwhile, Feller also landed a record deal of his own with United Artists, and released his debut single, "Biff, the Friendly Purple Bear," in 1973. 1974 was his best year as a solo artist, bringing two hits in "Makin' the Best of a Bad Situation" and the Top Ten "The Credit Card Song"; his final chart entry came with 1975's "Uncle Hiram and the Homemade Beer." Even if Feller had an obvious penchant for novelty humor, he could also play it straight, as evidenced by John Denver's 1981 hit version of the ballad "Some Days Are Diamonds (Some Days Are Stone)." In 1977, Feller and Reed collaborated on material for the hit film Smokey and the Bandit, which gave Feller his biggest exposure ever. He recorded only sporadically after that, drifting out of the music business after a self-titled 1984 album on the small Audiograph label.