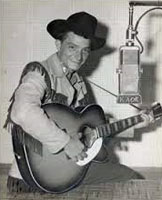 US Rockabilly singer born Alfous Glenn Ferrier, 19 August 1935, Montgomery, Louisiana. Al Ferrier has been hailed as the "King of Louisiana Rockabilly". Born into a large musical family (seven brothers, three sisters), Ferrier grew up listening to country music. Jimmie Rodgers and Grandpa Jones were among his favourites, and later especially Hank Williams, whose influence is audible in Al's very intense singing. At 13, he quit school to work in a logging camp with his brothers. By then, he had already been playing guitar for five years. Two older brothers, Brian and Warren, were both musicians. Brian was an exceptionally talented guitarist, who had played briefly with Hank Thompson's band. As soon as Al was old enough, the three Ferriers formed a country trio, Al Ferrier & the Boppin' Billies, with Al on Vocals and rhythm guitar, Brian on electric lead guitar and Warren on fiddle and double bass. They played dances around South Louisiana. Local Cajun star Jimmy Newman introduced the Ferriers to Eddie Shuler, a TV repair man who had built a primitive recording studio to the rear of his repair shop in Lake Charles. It was here that Ferrier made his first recordings for the Goldband label, in March 1955. Shuler gave them Clarence Garlow's recently recorded "No No Baby" (Folk Star 1199) for their first record. The R&B song was transformed to raw swampy rockabilly with a wonderful chugging rhythm from Al and Brian's guitars. For reasons best known to himself, Eddie Shuler waited a full year before releasing "No No Baby", coupled with "I'll Never Do Any Wrong", a straight country song (Goldband 1031). In the meantime Ferrier had already done four more sessions, two in November 1955, one in January 1956 and one in February 1956.
"No No Baby" sold well locally and was followed by a second single in mid- 1956, "My Baby Done Gone Away"/"It's Too Late Now", again coupling a rockabilly number with a more traditional hillbilly song. This time there weren't too many takers and Shuler did not release any further Al Ferrier singles in the 1950s, though he had some great tracks in the can, like "Let's Go Boppin' Tonight", which is now considered a rockabilly classic. It seems that Shuler may have originally planned to issue it because the single that was finally released in 1970 (with "Let's Go Boopin' Tonight" on the label!) assigned an earlier unused catalogue number, 1072. Disappointed by Shuler's lack of promotion, Ferrier jumped at the chance to record for J.D. (Jay) Miller, at his better equipped studio in Crowley. "Let's Go Boppin' Tonight" was rerecorded in a more polished version, which came out on Excello 2105 in early 1957 under the title "Hey Baby". Some of the lyrics had been changed and Miller's name replaced Shuler's as the co-writer (with Al). By this time Warren Ferrier had left the band to follow religious pursuits, but Brian and Al both play guitar on the Excello single, together with Miller's usual studio crew, including Katie Webster on piano and Warren Storm on percussion. The flip of "Hey Baby", "I'm the Man" displayed an obvious Johnny Cash influence. Ferrier stayed with Jay Miller for the remainder of the 1950s, with further recordings being released on Miller's own labels (Rocko, Zynn), in a more main- stream rock n roll style.
After many years of gigging, including four appearances on the Louisiana Hayride, Al retired professionally in the early 1960s, but still played in a family setting. But not long thereafter Eddie Shuler, realizing that his back catalogue had become very collectible, began dipping into his unreleased masters, with the result that quite a few "new" Goldband singles by Al hit the market, including the original "Let's Go Boppin' Tonight". In many cases, these 1950s recordings had been overdubbed with an electric bass and a piano. After Shuler had succeeded in tracking Al down, he resigned Ferrier to a Goldband contract and brought him back into the studio for new recordings, which were mixed with unissued 1950s tracks for release on many singles and two LP's.
The European rockabilly revival of the 1970s also inspired J.D. Miller to call on Al and in October 1975, he recorded him and his "New Boppin' Billies" at his studio for the LP "From 1955 to 1975 - The Back Sound Of Rockabilly" (Showtime LP 1000), which included previously unissued 1950s material as well. Miller also signed a licensing deal with the British Flyright label, resulting in two LP releases of 1950s recordings. Unfortunately, Brian Ferrier, to whose talent Al was heavily indebted, died in October 1981, aged only 49.
From 1980 onwards, Al has performed many times at the New Orleans Jazz and Heritage Festival. His European popularity brought him to Holland in 1987, where he performed at the Rockhouse Rock 'n' Roll Meeting in Zwolle and cut a new album for Rockhouse Records, called "Dixie". This was soon followed by an LP for Floyd Soileau's Jin label. In the 1990s, Al decided to turn his back on secular music and started performing and recording gospel music, still for Goldband. Commercial success has continued to elude Ferrier, but his recorded legacy is authentic and important.