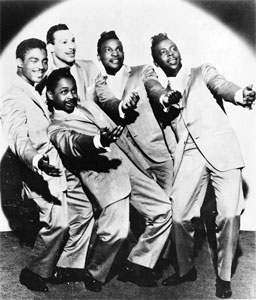 The Fiestas' career spanned nearly 20 years, and they came along at a time when soul music was gaining prominence in the vocal group scene. Their biggest hit was 1959's "So Fine," which reached number three on the R&B charts before crossing over to number 11 on the Hot 100. The Fiestas -- lead vocalist Tommy Bullock, Eddie Morris, Sam Ingalis, and Preston Lane -- were originally from Newark, NJ. They were signed to Old Town by owner Hy Weiss in 1959 after he heard the group singing "So Fine" in the bathroom next to his office (which was run out of the cloak room of the Triboro Theatre on 125th Street and Third Avenue in Harlem). The single shot onto the charts immediately.
Weiss followed suit with the group's next single, "Last Night I Dreamed," which failed to connect. He continued trying, however, issuing soulful R&B sides that were similar to what artists like Sam Cooke and Jackie Wilson had been doing. Of these, favorites include "You Could Be My Girlfriend," a cover of Arthur Alexander's "Anna," and its flipside, "Think Smart," which is now a much-coveted Northern Soul rarity. A ballad from 1962, "Broken Heart," scored number 18 on the R&B charts, but failed to chart on the pop lists.
The Fiestas eventually moved over to Strand (a New York label that started as a full-priced label but soon began specializing in budget issues) and then to Vigor, recorded through the '60s and into the mid-'70s, but never again enjoyed any hits.