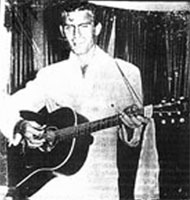 "The Wild Man from Texas," rockabilly cat Sonny Fisher recorded a series of little-heard but incendiary singles for the Starday label during the mid-'50s, finally winning acclaim from European audiences close to a quarter century later. Born Therman Fisher on a farm outside Chandler, TX, on November 13, 1931, he grew up in Tacoma, WA, but eventually returned to the Houston area. First drawn to music by his father, an amateur singer and guitarist, the adolescent Fisher also favored Hank Williams, Roy Acuff, and Ernest Tubb. Fisher formed his own country band in 1951, assembling fiddler Paul Vaughan, steel guitarist Red Leonie, bassist Leonard Curry, and drummer Darrell Newsome. With the addition of electric guitarist Joey Long, the group began incorporating R&B covers into its repertoire, and after Fisher witnessed Elvis Presley's late 1954 appearance at Houston's Texas Korral, he steered his music fully in the direction of rockabilly, sacking Vaughan and Leonie while dubbing the remaining trio the Rocking Boys.
Following an appearance at Houston's Cosy Corner, Fisher signed with the local Starday imprint, cutting his debut single, "Rockin' Daddy," in early 1955. Though earning little notice outside the local market, the record remains a classic example of rockabilly at its most primal, galvanized by Fisher's impassioned Vocals and Long's ferocious guitar soloing. "Sneaky Pete" followed in the spring, and while it too failed commercially, Presley was so impressed that he borrowed Newsome for a series of Houston performances. Fisher and the Rocking Boys closed out the year with "Rockin' and a-Rollin'" and in mid-1956 resurfaced with the blistering "Pink and Black." When all four singles netted Fisher a royalty check amounting to only 126 dollars, he refused to renew his Starday deal, instead co-founding Columbus Records with Newsome. Fisher produced sides for singer/guitarist Eddie Eddings and saxophonist Hub Sutter, but never recorded for Columbus himself, eventually selling his share of the company to Newsome. After the Rocking Boys split, he led his own R&B group for a time before returning to country, working the Houston nightclub circuit until 1965, when he retired to mount his own flooring business.
In 1979 Ted Carroll and Ray Topping, founders of the British reissue label Ace, tracked down Fisher at his home in Crosby, TX. With vintage rockabilly all the rage in Europe, they financed Fisher's first tour of the U.K. and collected his eight Starday sides on a much-acclaimed 10" LP, Texas Rockabilly. The singer's talents proved to have diminished little if at all in the years since his retirement — and with his jet-black pompadour and jaw-length sideburns, he also looked much as he did on-stage at the Cosy Corner 25 years earlier. With Scottish backing band Johnny & the Roccos, Fisher entered the studio in mid-1980 to record a new four-song EP, followed a year later by the Big Beat release of his first ever full-length effort, Texas Rockabilly Tear-Up. After returning home to the Lone Star State, Fisher dropped out of sight for over a decade, but in 1993 he turned up in Spain, cutting Rockabilly Fiesta with fellow Texas legend Sleepy LaBeef and the Spanish group los Solitarios. The recording was Fisher's swan song. Little is known of his activities in the decade prior to his death in Houston on October 8, 2005.