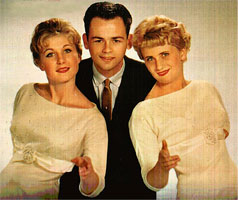 Although the Fleetwoods' sound was smooth, without many of the rougher edges of doo wop groups, they were one of the few white Vocals groups of the late '50s and early '60s to enjoy success not only on the pop charts, but also the R&B charts. Their forte was ballads -- beginning with the 1959 debut single "Come Softly to Me," they racked up a number of hits over the next three years, and nearly all of them were ballads. the Fleetwoods broke up in 1963, but their songs -- particularly "Come Softly to Me" -- became pop/rock classics of the pre-British Invasion era.
Gretchen Christopher, Barbara Ellis, and Gary Troxell formed the Fleetwoods while attending high school in Olympia, WA. Originally, the group consisted only of Christopher and Ellis, but the duo soon asked Troxell to accompany them on trumpet. Shortly after his arrival in the group, Troxell abandoned the trumpet and concentrated on singing once the other two members heard a portion of a song he had written. With some notable contributions from Christopher and Ellis, the group wrote "Come Softly to Me" and began performing the song at various events around Olympia, eventually gaining the attention of Bob Reisdorff, who ran the Seattle-based label Dolphin Records.
Dolphin released "Come Softly to Me" early in 1959 and the song became an instant hit, climbing to number one on the pop charts and number five on the R&B charts; it also reached the Top Ten in U.K. the Fleetwoods weren't able to immediately produce a follow-up single as successful as their debut, but their third single, "Mr. Blue," was a number one pop and Top Five R&B hit in the U.S. in late 1959. By the time of its release, Dolphin had changed its name to Dolton. For the next three years, the Fleetwoods had a string of minor pop hits. The group wasn't able to consistently place singles in the upper regions of the charts partially because Troxell was drafted into the Navy at the height of the group's popularity at the end of 1959. Troxell was replaced by Vic Dana, who would later have a string of his own hit singles in the early '60s.
The Fleetwoods' last Top Ten single arrived in the spring of 1961, when "Tragedy" climbed the U.S. charts. The group disbanded two years later, after releasing its final single, a cover of Jesse Belvin's "Goodnight My Love." Over the next three decades, the Fleetwoods reunited occasionally to perform concerts and appear in oldies revues. In 1973, the group recorded an album with producer Jerry Dennon, but the resulting recordings were unsuccessful. In 1990, the Fleetwoods -- featuring Christopher, Troxell, and instead of Ellis a singer named Cheryl Huggins -- played a tour on the American oldies circuit after Rhino released the compact disc collection The Best of the Fleetwoods