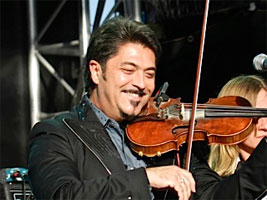 Bobby Flores is a multi-instrumentalist, vocalist, arranger, producer, composer and first call session musician.  He studied music theory and classical violin at Trinity University under the late Domenick Saltarelli, jazz guitar with Jackie King and classical guitar with David Underwood.  Bobby is featured on over four hundred albums, CD’s and singles, including performances with numerous artists on major labels.  He composes music for radio and television commercials airing throughout the U.S., Europe and Australia.  While Bobby feels at home in the country, pop-rock, jazz, blues, Latin and classical genres, he also enjoys composing for and performing with string quartets.
In 1968, at the age of seven, Bobby started his professional career by performing at local functions and Texas area circuits in a gospel duo with his mother Mary Jane Flores.  Two years later, Bobby began working nightclubs as a featured single artist with George Chambers & The Country Gentlemen, a well known San Antonio country band.
The next ten years would set the precedence for Bobby’s career.  He formed his first band at the age of thirteen and started opening for national artists such as Tanya Tucker and Conway Twitty.  To coincide with Bobby’s live performances, he was also chosen to be a feature spokesman for the regional Big Red soft drink television commercials.  Shortly afterward, he recorded his first of four charting country singles and released his first LP album on the San Antonio based Joey Records.
By the middle 80’s, Bobby had become bandleader, show opener and fiddle player for Johnny Bush and the Bandoleros, vocalist/guitarist for Top 40 and rock bands, “Gone City” and “The Boiz”, and was also performing with the Trinity University Community Orchestra.
In 1988, along with brother, Greg and sister, Sandra, Bobby formed the band “Angel Fire” and played the Texas “A” circuit until 1997, opening for numerous country superstars, including George Strait and Garth Brooks.  Shortly thereafter, he toured the U.S. and Canada with David Kersh (Curb Records), including performances for Prime Time Country on TNN and numerous radio shows.  As fate would have it, this turn of events led him to his dream job of becoming first violin/fiddle player for Ray Price through 2001.  This also inspired Bobby to record his debut CD, “Just For The Record”.  In 2002, Bobby received a Grammy Award for string and brass arrangements and violin performances on Freddy Fender's CD, “La Musica de Baldemar Huerta”.
It’s 2007, and Bobby Flores is continuously gaining recognition as one of Texas’ premier musicians and vocalists, both on stage and in the studio.
Bobby Flores died on June 23, 2022.