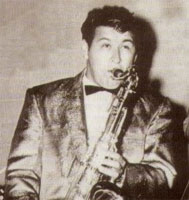 An interesting minor figure in the development of West Coast rock'n'roll and a pioneer in the entry of Chicanos into rock music, Chuck Rio was the man behind the raunchy sax breaks on the Champs' #1 instrumental in 1958, "Tequila." Born Danny Flores, Rio was a versatile sax player with a honking tone who made his first record in 1953. Rio/Flores bounced around for a few years and made some unsuccessful recordings before ending up in the Champs. "Tequila," based on a riff by Rio, was originally a throwaway B-side; as would sometimes happen in those days, it became the plug side when it started picking up radio play. With its Latin-flavored rhythms, wailing sax breaks, and occasional utterances (by Rio) of the title, it topped the charts, but Rio didn't stay in the group too long, although he did play on some "Tequila" soundalikes such as "El Rancho Rock" and "El Rancho Rock."
Rio continued to record in the late 1950s and 1960s, usually sticking to generic sax-dominated rock instrumentals with a Latin feel, and never remotely coming close to the success of "Tequila." In 1963 he teamed up with the Persuaders to make an album, Surfer's Nightmare, which linked his instrumental music with the surf craze without changing it much except to make guitars more prominent. A compilation of Rio and Rio-related sides, including solo material, Champs cuts, and the Persuaders album, was issued by Ace in 1998.