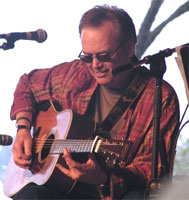 Bluegrass and country guitarist and songwriter Pat Flynn first gained attention as a member of New Grass Revival, appearing on the group's albums Live (1984), On the Boulevard (1984), New Grass Revival (1986), Hold to a Dream (1987), and Friday Night in America (1989), and writing songs included on these albums, including the title songs for On the Boulevard and Friday Night in America. "Do What You Gotta Do," which he wrote for Friday Night in America, was later recorded by Garth Brooks for his album Sevens (1997). Flynn played on the track, which initially made number 62 in the country charts; upon re-release it reached number 13 in the country charts and number 69 in the pop charts in 2000. After his stint in New Grass Revival, Flynn became a successful country session musician, appearing on recordings by the Bellamy Brothers, Mark Chesnutt, Nanci Griffith, Loretta Lynn, Kathy Mattea, Michael Martin Murphey, Leon Russell, George Strait, Randy Travis, Conway Twitty, and Lee Ann Womack, among many others, during the 1990s and 2000s. On August 10, 2004, he released his debut solo album, reQuest.