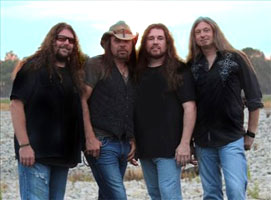 Muncie, IN, may not be known as a home for hard-edged honky tonk music, but country-rockers Flynnville Train are out to change that with their fusion of blues-based rock & roll and outlaw country styles, played with maximum barroom swagger. Flynnville Train was formed in 2001 by brothers Brian Flynn on lead Vocals and Brent Flynn on lead guitar. The band spent several years playing clubs in the Midwest, and eventually caught the ear of Richard Young, guitarist with the Kentucky Headhunters, who helped produce an album the band released themselves. Young was enthusiastic about the results and passed along a copy to an agency that handles booking and management for the Headhunters; the disc made its way to another of the company's clients, Toby Keith, who was mighty impressed and checked out the band live. After seeing Flynnville Train on-stage, Keith signed the band to his record label, Show Dog Nashville, and Flynnville Train's self-titled album for Show Dog was released in the fall of 2007. After years on the road, they went into the studio with producer and "silent fifth member" David Barrick and recorded their sophomore release Redemption. The album was released by the Next Evolution label in 2010.