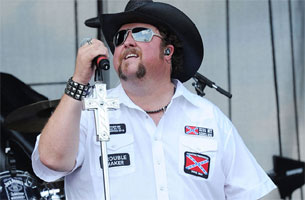 US Country singer born August 27, 1969 in Athens (Georgia). The reason Colt Ford's blending of country and rap feels so natural has everything to do with his background, both professional and personal. Just like his closest "hick-hop" competition, Cowboy Troy, Colt grew up listening to country -- his first concert was Kenny Rogers and Dolly Parton -- along with R&B and hip-hop. When the Georgia native reached adulthood he began writing songs, eventually earning co-writing credits with Jamey Johnson, Jeremy Popoff, and the alternative rock band Lit. After a few years, the popular country music duo Montgomery Gentry became clients, then the urban side of Colt's style was put to use when rapper Bone Crusher and urban superstar Jermaine Dupri came calling. He went from behind the scenes to up front in 2006 when he wrote "Buck 'Em," the theme for the Professional Bull Riders, Inc. In 2008 he released his debut album, Ride Through the Country, and went on tour with country music up-and-comer Brantley Gilbert. Chicken and Biscuits followed in 2010, with the impressive Every Chance I Get arriving in 2011. Ford by this time had created a larger than life hillbilly redneck public image, but he was also a sly, passionate, and multi-layered writer and businessman, and as a former drummer, he knew what to do in a recording studio. After starting his own label, Average Joe's Records, Ford worked and toured outside the commercial Nashville umbrella, but he knew his way around the business, and he co-wrote songs with Nashville pros like Jeffrey Steele, Craig Wiseman, Rodney Clawson, and David Lee Murphy for his next project, Declaration of Independence, which appeared in 2012. That record became his most successful to date, and a follow-up, Thanks for Listening, appeared just as summer was kicking off in 2014. In May 2017, Ford dropped his sixth album, Love Hope Faith, which included guest appearances from Brad Paisley, Toby Keith, Charles Kelley of Lady Antebellum, and '90s rockers Lit.