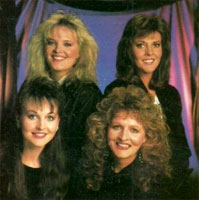 Vocals quartet the Forester Sisters enjoyed a strong run of success on the country singles charts during the latter half of the '80s. Kathy, June, Kim, and Christy grew up in Lookout Mountain, GA, and got their initial singing experience in their church choir. Kathy and June, the two eldest, both took jobs as teachers after graduating from college, and sang together in a local band by night. Kim joined in 1978, and the sisters soon hit on the idea of forming their own group; after Christy finished college, Kathy and June quit their day jobs, and the foursome soon began to perform on a regular basis. They were discovered at an arts festival by songwriters Bobby Keel and Billy Stone, who helped them record a demo that got the group signed to Warner Bros. in 1984; Keel and Stone also contributed "Yankee Go Home" to their self-titled debut album, which appeared the following year. Their first single, "That's What You Do (When You're in Love)," reached the Top Ten, and their next two -- "I Fell in Love Again Last Night" and "Just in Case" -- went all the way to number one in 1985 and 1986, respectively. Follow-up "Lonely Alone" stalled at number two, but "Mama's Never Seen Those Eyes" brought the Forester Sisters back to the top of the charts for a third time. While the group would never equal that incredible run of success, they went on to score eight more Top Ten hits -- all consecutively -- through 1991, when their run came to a close with the humorous number eight hit "Men." They recorded occasionally during the '90s, cutting the gospel album Sunday Meetin' in 1993 and returning to country with 1996's More Than I Am.