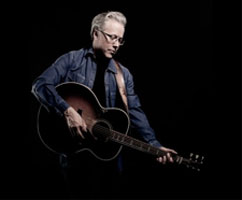 Radney Foster started his career as a songwriter, then found commercial success and critical acclaim as part of the duo Foster & Lloyd, and finally embarked on a solo career in 1991 that centered on his literate approach to country songwriting. Foster was born in Del Rio, TX, and took up the guitar at age 12. He began performing small-club gigs while attending the University of the South, a liberal arts college in Sewanee, TN, and took leave from school to try his luck in Nashville. In 1985, he signed with the MTM publishing firm as a staff songwriter, and soon struck up a partnership with Bill Lloyd, who joined the company two months later. Their "Since I Found You" became a Top Ten hit for the Sweethearts of the Rodeo, and on the strength of their demo tape RCA signed them as recording artists. Foster & Lloyd recorded three albums from 1987-1990, and landed a series of Top Ten singles in addition to complimentary reviews.
When their third album tanked, the duo amicably disbanded and Foster pursued a solo career. His debut, Del Rio, Texas, 1959, appeared in 1992 and proved a commercial as well as critical success; four of its singles hit the Top 40, and of those, "Just Call Me Lonesome" made the Top Ten, while "Nobody Wins" fell one spot short of the top of the country charts. However, the 1995 follow-up, Labor of Love, wasn't quite as popular with audiences as it was with critics. Foster revamped his approach on his third solo effort, 1999's See What You Want to See, which was more influenced by pop and rock. He subsequently parted ways with his label, Arista, and signed with the smaller Dualtone, which issued the live album Are You Ready for the Big Show?, a more traditional country outing, in 2001. The studio follow-up, 2002's Another Way to Go, found Foster exploring classic-style R&B in addition to country. In 2004 he released the acoustic album And Then There's Me (The Back Porch Sessions), only available online, but 2006 saw another Dualtone record, This World We Live In.
Foster reunited with Bill Lloyd for 2011's It's Already Tomorrow, and returned to solo status for 2014's Everything I Should Have Said. Early in 2017, Foster appeared in a musical called Troubadour featuring music by Kristian Bush. Later in the year, he released For You to See the Stars, an album that was accompanied by a book of stories.