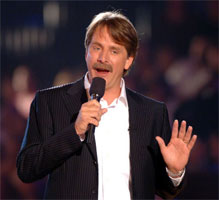 Jeff Foxworthy's wry Southern humor made him one of the most popular standup comedians of the '90s. Foxworthy grew up in Atlanta and was working for IBM when he tried standup on a dare. Before long, he'd quit his job to pursue comedy full-time. His material concentrated mainly on family situations, but it was his affectionate jabs at Southern rednecks (or the "gloriously unsophisticated") that catapulted him to stardom. Originally released on Laughing Hyena in 1993, You Might Be a Redneck If... became a word-of-mouth hit, and Warner Bros. bought his contract in 1994. With their added promotional muscle, You Might Be a Redneck If... climbed to number three on the country album charts in 1995, and eventually sold over four million copies, making it the biggest-selling comedy album of all time. His follow-up album, Games Rednecks Play, appeared later in 1995 and went to number two on the country charts, also crossing over to the pop Top Ten; it sold over two million copies. Foxworthy was an undeniably hot commodity, and ABC offered him his own sitcom in 1995. Ratings for The Jeff Foxworthy Show were disappointing, but when ABC took a pass, NBC picked up the show for an additional season; it was canceled in 1997. Meanwhile, Foxworthy branched out into musical satire on 1996's Crank It Up: The Music Album, which went gold and once again made the country Top Five. He returned to standup on the 1998 live album Totally Committed, another country Top Ten hit. Foxworthy subsequently moved over to DreamWorks, where he debuted with 2000's Big Funny. That same year, he teamed up with Bill Engvall, Ron White, and Larry the Cable Guy for the hugely popular Blue Collar Comedy Tour, which spawned an album of highlights and, in 2003, an accompanying concert film.