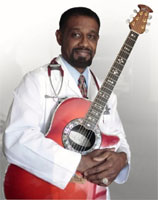 While he dreamed of a career in country music as a boy and even learned guitar as a youth, performing seemed destined to became only a hobby when Cleve Francis obtained his degree from the Medical College of Virginia in 1973. Francis moved to Washington, D.C., and established himself as a cardiologist. However, he was soon moonlighting in local clubs as a singer, and even self-released three albums on his own label. Francis' real break came through heart-attack patient Olaf Hall, whose brother was "Big John" Garfield Hall, a member of the R&B band the Heartbeats. Big John helped Francis get an audition with Playback Records, who signed him and released an album; while it didn't sell well, his debut single and video, "Love Light," released in 1990, both won critical acclaim. The widespread attention led to a deal with Liberty, who released Francis' Tourist in Paradise in 1991, when he was 48. It marked the first prominent contract for a black country artist since Charley Pride. The album featured a re-recorded version of "Love Light"; it and two other cuts from the record became minor chart hits. Two years later Francis returned with Walkin', which appeared on Capitol. Its title track made a few waves, but failed to make him a household name. You've Got Me Now appeared in 1994 on Liberty, but by 1995 Francis had left the industry and returned to his medical career. In 1998, he was one of the motivational forces behind Warner's From Where I Stand: The Black Experience in Country Music.