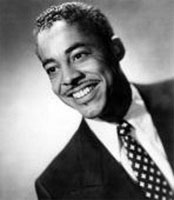 One of so many interesting behind-the-scenes figures of early rock & roll, pianist and arranger Ernie Freeman played on numerous early rock and R&B sessions in the '50s. He worked on dates for the L.A. indies Specialty, Modern, and Aladdin, as well as white artists such as Duane Eddy, Johnny Burnette, the Crickets, Bobby Vee, and Buddy Knox; his most memorable session appearance was probably on the Platters' "The Great Pretender," to which he contributed the stuttering piano riffs. Freeman also put out many instrumental records of his own, mostly for Imperial, and usually in a generic rocked-up jump R&B sort of style. "Jivin' Around" and "Lost Dreams" were R&B hits for him in 1956, but he got his sole crossover pop smash with a cover of Bill Justis' "Raunchy" in 1957, which made number four.
It was a strange situation: Justis' original hit number two, and a pop-oriented cover by Billy Vaughan also made number ten, leading to an incredible happenstance in December 1957 whereby three versions of "Raunchy" were in the Top Ten at the same time. Freeman's cover copied Justis' fairly closely, and wasn't quite as good; it's almost always Justis' original that is played on oldies radio today. Freeman was unable to make the Top 40 again, although he had minor hits with "Indian Love Call," "Theme from 'The Dark at the Top of the Stairs," and a cover of Chubby Checker's "The Twist"; he also recorded in the easy-listening style under the pseudonym Sir Chauncey, sneaking into the bottom of the Top 100 with "Beautiful Obsession." His own career petered out by the mid-'60s, but he worked with Frank Sinatra, Dean Martin, and Sammy Davis Jr. at Reprise, and as late as 1970 was doing some string arrangements on Simon and Garfunkel's Bridge Over Troubled Water album.