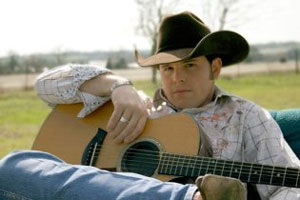 Plenty of country singers act like they're cowboys, but Todd Fritsch doesn't have to pretend -- when he's not on the road or in the studio, Fritsch helps run his family's Texas cattle ranch, and he helps raise up to 40,000 head of cattle each year when not busy performing his brand of traditional honky tonk music. Fritsch was born in 1981 in Willow Springs, a rural community west of Houston; at the age of 14 he became interested in music, and started singing in local talent competitions with his sister. Music was one of many interests (including sports and horses) that occupied Fritsch when he attended high school in Fayetteville, but after completing college he rediscovered his enthusiasm for music and began singing again, as well as writing songs. Fritsch began playing the Texas honky tonk circuit, and in 2005 he released his self-titled debut album, which earned him some nationwide radio airplay for the song "Small Town Radio." Fritsch's second album, Sawdust, arrived in 2007, followed by significant touring both in the United States and Europe.