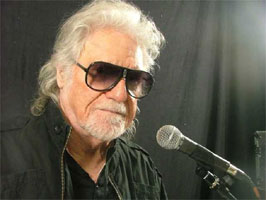 Raymond "Froggy" Froggatt was a singer/songwriter who spent much of his tumultuous career struggling to gain recognition. Born in Birmingham, England, he made his debut singing at a Dunlop factory party and received ten cents for his efforts. Froggatt was a sickly child who spent much of his youth battling tuberculosis in the Yardley Sanatorium. He left school in the 1950s to work a series of odd jobs. He had a recurrence of tuberculosis at age 18, and this time it attacked his kidneys and bladder. While isolated at yet another sanatorium, he took up poetry and decided to form a band. After advertising for musicians in the Birmingham Evening Post, he met young guitarist Hartley "H." Cain, bassist Lou Clark, and drummer Len Ablethorpe.
The band began playing the Birmingham club circuit and became regulars at the Belfry, a popular club. There Monopoly gained a devoted following, and was eventually signed by Polydor Records to a five-year contract in 1964. Froggatt's first success came with his song "Red Balloon." Unfortunately, though played on local radio stations for two months, it was badly mishandled and never appeared in stores; later the song became a hit for the Dave Clark Five, and then for Marie Laforet in France. Froggatt signed to Bell Records in 1972, where he and Monopoly cut their first album, Bleach. The album's first single "The Singer" was mishandled by an inept deejay who accidentally played the record too fast on the Roundtable Show. The panelists had a good laugh and the single died then and there. Still, the album sold fairly well.
After his Bell contract expired, Froggatt signed with music entrepreneur Don Arden, who was known as a starmaker and could perhaps provide the singer a chance to make it in the U.S.
Arden put Froggatt on staff for Robbins EMIL Music Publishers and pre-sold all of his future recordings to Warner Brothers. His first single for Warners did nothing, but still the label suggested that he make an album at Richard Branson's Manor studio in Oxford. Rogues and Thieves came out in 1974 and almost made it to the charts, but was for the most part ignored. Arden then made Froggatt and his band tour with the band Wizzard, which played a totally different kind of music. The stress of the tour caused discord with Monopoly and eventually they went their separate ways.
During this time, Froggatt had been working on a musical production based on Shakespeare's life, which Arden sold to ATM Music. It was filmed as a televison movie, but never aired. Arden then founded Jet Records in the U.S. and Froggatt moved there. Though he asked to be released from his contract, Arden refused. Not long after, a dishonest business manager bankrupted Froggatt and he was left destitute. His former bandmate Cain encouraged him to talk to Arden, who helped both men get to the U.S. to record Memphis Moonshine. Unfortunately, it was never released. Froggatt then recorded the album Southern Fried Frog with the hopes of catching the U.S. country market. Unfortunately, it was distributed as a rock album.
In 1979, Froggatt recorded one final album for Arden and was finally released from his contract. He began touring the U.S. as an opening act; though unfavorably received, he didn't let audience hostility stop him. Eventually his persistence paid off and he at last began to get warmer receptions from fans. He ultimately became a very popular figure on the international country music scene; he continued to write his own songs and in 1993 released Here's to Everyone on his label. He published his autobiography, Raymond Who, in 1995.