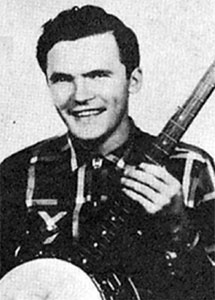 US Country singer born James David Gateley, May 1, 1931, Springfield, Missouri. Gateley learned to play fiddle and first appeared with a local band on KGBX Springfield in 1951. After a spell with the Red River Rustlers in Jamestown, North Dakota, he became a member of Dusty Owen’s Rodeo Boys on Wheeling Jamboree on WWVA Wheeling, West Virginia. He returned to Springfield in 1954, where, until 1963, he worked on radio and television with Red Foley on Ozark Jubilee and Jubilee USA. In 1963, he started a long association with Bill Anderson, for whom he played fiddle, sang, acted as frontman and was also featured on many of Anderson’s recordings. He became a regular on the Grand Ole Opry with Anderson and also in a double act with Harold Morrison. He made his first solo recordings for Cullman in 1959 but later recorded for several labels, including Starday, Decca Records, Columbia Records, Chart, Sapphire, B.T. and Constoga. He failed to achieve a chart hit with his own recordings but his talents as a songwriter led to some of his songs becoming hits when recorded by others. These include ‘Alla My Love’ (a number 5 in 1962 for Webb Pierce) and ‘The Minute You’re Gone’ (a number 9 in 1963 for Sonny James). He co-wrote ‘Bright Lights And Country Music’ with Bill Anderson, whose recording of the song reached number 11 in 1965. He appeared in the filmsThe Road To Nashville andLas Vegas Hillbillies. He became a deacon of his local Madison, Tennessee church and in the 70s, he became more inclined towards gospel music. In the early 80s, he released an album of gospel songs, and a further one, My Kind Of Country, was distributed by his local church after his death. Jimmy Gateley dead March 17, 1985