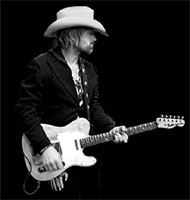 Born on May 26, 1970, in Austin, TX, country singer Keith Gattis began making music when he was 16, putting together a trio that played around his hometown. He eventually helped organize another act that won a statewide Future Farmers of America (FFA) talent competition, with one of the prizes being the opportunity to play before in excess of 20,000 people at the organization's national convention. During college, Gattis became more serious about his songwriting and guitar-playing. Upon graduation, he moved to Nashville, landing a job in a music store, and quickly set to playing out anywhere that he could. By 1991, he was working with Sammy Kershaw's management and secured a record deal with RCA. His self-titled debut arrived in April 1996, with a sound rooted in traditional country that endeared Gattis to critics and purists but failed to capture the fancy of the mainstream market. Dropped from RCA, Gattis has not released an album since then, but has continued to play, adding some guitar to a George Jones album and co-writing a song with singer Sara Evans in 1999.