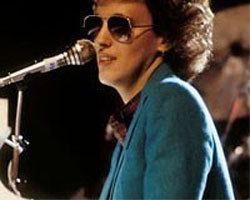 Country-pop singer/songwriter/keyboardist Terri Gibbs enjoyed some success in the early '80s before returning to the gospel music she grew up with. Gibbs was born in Miami in 1954 and raised from age one in Augusta, GA; blind from birth, she turned to music at an early age, first playing the piano at only three years old. In addition to gospel music, she listened to early rock & roll, pop, and soul (particularly Ray Charles), and loved the Grand Ole Opry radio show. She sang in choirs and talent contests while growing up, and met Chet Atkins backstage at one show. At his request, she sent him a demo tape, and at 18 followed his advice to try her luck in Nashville. She didn't have much luck attracting record companies, and instead moved to Miami, where she played keyboards in a band called Sound Dimension. In 1973, she quit the band to attend college, but dropped out after a year to focus on songwriting. She returned to Augusta, formed her own band in 1975, and played locally for the next several years. Her demo tape found its way into the hands of producer/songwriter Ed Penney, who signed her to MCA in 1980.
The title cut of Gibbs' Top Ten debut album, Somebody's Knockin', was a major crossover hit in 1981; not only did it reach the country Top Ten, it also just missed similar territory on the pop side, and climbed into the Top Five on the adult contemporary charts. The follow-up, "Rich Man," was a Top 20 country hit, and Gibbs was named the ACM's Best New Female vocalist, also winning the CMA's inaugural Horizon Award (for artists rising to new levels of prominence). However, while Gibbs charted with two more albums (1981's I'm a Lady and 1983's Over Easy), neither matched the success of her debut. Likewise, she managed two more Top 20 country hits in 1982's "Ashes to Ashes" and 1983's "Anybody Else's Heart but Mine," but nothing on the level of "Somebody's Knockin'." Still, she embarked on a high-profile tour with George Jones over 1981-1982, often duetting on-stage with him. Gibbs spent several years off-record, then switched to the kind of country gospel music she'd started out singing. She returned in 1987 with the Grammy-nominated Turn Around; "Unconditional Love," "Comfort the People," and "Promised Land" were all successful on the CCM charts. After 1990's Great Day, on the small Morning Gate label, Gibbs left music to concentrate on her family.