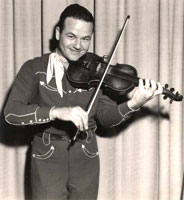 One of the most impressive fiddle players in country music's history, Johnny Gimble confounded most of his rivals by using a five-string fiddle. He gained most of his early success with Bob Wills' Texas Playboys, but Gimble has also recorded over ten albums of his own and picked up awards as Instrumentalist of the Year (CMA) and Best Fiddle Player (ACM).
John Paul Gimble was born on May 30, 1926, in Tyler, TX. At the age of 12, he played in a band with his four brothers, and in the early '30s formed the Rose City Swingsters with brothers Gene and Jerry. The band played on local radio, but Gimble soon moved to Louisiana to play with Jimmie Davis. In the late '40s he joined Wills, playing fiddle and electric mandolin with the Texas Playboys. From 1951-1953, Gimble led his own group, which played as house band at Wills' club. He then returned to the Playboys, but the decline of Western swing in the late '50s and early '60s forced him out of the business.
Gimble worked as a barber and a hospital worker during the '60s, but returned to record with Wills in 1969. The experience primed him for heavy session work during the early '70s, including Merle Haggard's 1970 Wills tribute album and Wills' final appearance on LP, For the Last Time (1974). That same year, he recorded the first of his many solo albums, Fiddlin' Around.
Gimble gained the first of his five Best Instrumentalist and eight Best Fiddle Player awards in the late '70s, and performed with Willie Nelson's touring band from 1979-1981. Gimble finally hit the charts in 1983 with his Texas swing group and the added attraction of Ray Price on Vocals. The single "One Fiddle, Two Fiddle" was taken from the Clint Eastwood film Honkytonk Man, and it reached number 70. The B-side, Wills' famous standard "San Antonio Rose," also charted. The sideman credits also continued to add up, and in 1993, Gimble was nominated for a Grammy award in the Best Country Instrumental Performance category, for his work on Mark O'Connor's fiddler tribute album, Heroes. Also, Gimble is often seen playing on Austin City Limits and Garrison Keillor's TV programs.
Johnny Gimble died May 9, 2015 in Dripping Springs (Texas).