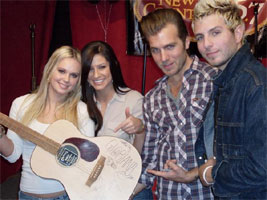 Nashville-based country Vocals group Gloriana was formed in 2007 when brothers (and guitarists) Tom Gossin and Mike Gossin, who had been working as a duo in the North Carolina area, moved to Nashville and met Rachel Reinert. The Vocals chemistry was obvious from the start, and when Cheyenne Kimball joined, the group was set, adding Kimball's Vocals and mandolin skills to the mix. After several months rehearsing and working on their sound, the band sent a demo to Emblem Music Group, a new label just founded by Matt Serletic. Serletic liked what he heard and signed the quartet, releasing the group's debut album, the self-titled Gloriana, in 2009. Country audiences flocked to the album, sending it to number two on the country charts and earning the quartet several awards, including Breakthrough Artist of the Year at the annual American Music Awards and Top New Vocals Group at the 2010 Academy of Country Music Awards. Gloriana recorded their follow-up album, 2012's A Thousand Miles Left Behind, without Kimball, who left the band in 2011, and the remaining three members wrote or co-wrote all the songs on the new release.