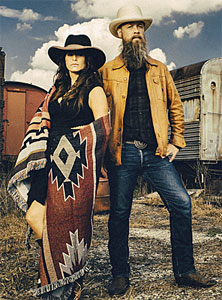 The Grahams are a country-rock duo from New York City consisting of Alyssa and Doug Graham. Childhood friends, high school sweethearts, and eventually husband and wife, the two had been collaborating in various musical styles for years before recording their Americana-inspired 2013 debut, Riverman's Daughter. Prior to the Grahams project, Alyssa had established a successful solo career in the mid-2000s as a pop and jazz singer, with two well-received albums under her belt. Wanting to make a shift toward original material, she and Doug took a road trip down the historic Great River Road, which parallels the Mississippi River. The journey provided plenty of artistic fuel and resulted in Riverman's Daughter, a mix of country, folk, bluegrass, and rock. Citing inspirations like Bob Dylan and Woody Guthrie, they followed up their debut with the ambitious Glory Bound in 2015. Trading America's famous waterways for its railways, the Grahams took a series of train trips, eventually hooking up with producer Wes Sharon to produce both the album and its accompanying film documentary, Rattle the Hocks.