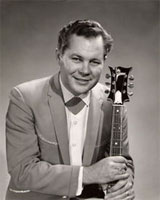 Longtime Grand Ole Opry member Billy Grammer was one of the great guitar players of country music; he even had a flat-top guitar named after him and installed in the Country Music Hall of Fame in 1969. He was one of 13 children born to a coal-mining family in downstate Benton, Illinois. Despite a youthful interest in science and engineering, the young Grammer often played fiddle, guitar, or mandolin at local gatherings, accompanying his father or performing solo. He served in the U.S. Army during World War II, and worked as an apprentice toolmaker. But after discharge, work was scarce for an eager young musician. When Grammer heard about an opportunity with Connie Gay's Radio Ranch, he hitchhiked to Arlington, Virginia; auditioned; and made the cut. Two years later, he made his recording debut. In 1955, Gay suggested to Jimmy Dean that Grammer join his television show. During his years on The Jimmy Dean Show, Grammer was a sideman in several bands, including those of Clyde Moody, Grandpa Jones, and Hawkshaw Hawkins. He founded his own band in 1958 and also began recording as a solo act. In 1959, he had his first hit with "Gotta Travel On," which peaked in the Top Five on the country charts and did well on the pop charts. That same year, he became a regular cast member of the Opry. Grammer went on to release instrument-centric albums such as 1962's Gospel Guitar and 1967's Sunday Guitar. He also had some chart success during the 1960s with cuts like "I Wanna Go Home," "I'll Leave the Porch Lights a-Burning," and "Bottles." In the 1970s, Grammer recorded two final solo albums and continued to do session work. He later retired from the studio, but continued to perform regularly on-stage at the Opry. Grammer was also the namesake of the Grammer guitar, a flat-top model built to his specifications. The instrument enjoyed some success in the 1960s and '70s, but was later undercut by cheap imports and industry consolidation.