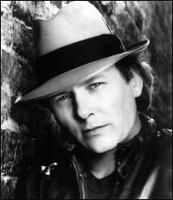 Over his career, singer/songwriter Mark Gray endured many ups and downs. He was born in Vicksburg, Mississippi, the youngest of seven children. His mother died when he was two, and he was raised on Lookout Mountain, Georgia by his aunt and uncle. It was there that he began singing gospel music and learned to play piano. He returned to his father's 250-acre Mississippi farm when he was 15 and later became a finalist on the Ted Mack Amateur Hour. He also began singing commercial jingles.
In 1972, Gray was selling spots for an R&B radio station while singing with the Revelations, a gospel group he founded, on weekends. The Revelations were performing in Meridian, Mississippi when they were spotted by the Oak Ridge Boys, who asked Gray to join their publishing company and appear on their tours. Gray moved to Nashville, but took a substantial cut in income and spent several impoverished years. He eventually left the Oaks to join another gospel group, the Downings. He became so popular that the group fired him, and returned to Vicksburg, where he performed in Jackson nightclubs.
In 1979, his luck began to change and he was invited to join Exile. Gray honed his songwriting skills when not performing with the group, and two songs co-written with J.P. Pennington, "Take Me Down" (1982) and "The Closer You Get" (1983), became major hits for Alabama. Gray recorded two albums with Exile and remained with them until 1981, when he left to pursue a solo career and sell songs. After Janie Fricke recorded his "Losing Ain't Nothing Like Losing a Friend," he signed to Columbia Records. His first solo single, "If It Ain't Real (It Ain't You)," made it to the Top 30 in early 1983; his second effort, "Wounded Hearts," made it to the Top 20. In addition, performers such as Engelbert Humperdinck and Melissa Manchester continued to record his songs. In 1984, Gray scored four Top Ten hits, including "Diamond in the Dust," from his second album, This Ol' Piano. In 1985, he had two more Top Ten hits, but within a year his solo career had ground to a halt. Gray asked Columbia to release him from his contract, and continued to record for independent labels.
Mark Gray died on December 2, 2016