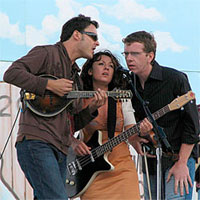 Texas contemporary bluegrass trio the Greencards are aptly named. After coming to the realization that their English and Australian homelands were not so conducive to their uniquely American style of music, mandolin player Kim Warner, fiddler Eamon McLoughlin, and bass player Carol Young took their love of Ricky Skaggs and Bob Dylan, mixed it with a little Fairport Convention and David Bowie, and began hitting clubs in the Lone Star State. By 2004 they had earned themselves the Best New Band award at the Austin Music Awards, as well as a devoted fan base that included Robert Earl Keen. Their debut, the self-released Movin' On, arrived that same year and managed to sneak its way up the Americana charts, eventually peaking at number five. The grouped signed with Dualtone the following year and went into the studio to begin work on the follow-up. Highly sought-after engineer Gary Paczosa (Dolly Parton) was brought in and Weather and Water was born. Released in June of 2005, it's an impeccably recorded collection of ballads, instrumentals, and harmonious melodies that holds its own against contemporaries like Alison Krauss and Nickel Creek. It was followed in 2007 by Viridian.