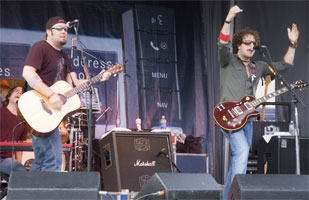 Halfway to Hazard is a rock-influenced country duo featuring Chad Warrix on Vocals, guitar, and mandolin and David Tolliver on Vocals and guitar. Warrix and Tolliver both grew up in small towns in southeastern Kentucky, and enjoyed remarkably similar lives -- they were raised in working-class families, had big sisters, enjoyed sports, and would regularly make the trip to Hazard, KY, which was big enough to have movie theaters, places to buy beer, and venues for live music. Despite living 50 miles apart, Warrix and Tolliver became friends after often running into one another in Hazard. Tolliver was introduced to music as a child, performing with his family's singing group, while Warrix started writing and singing his own songs with a rock band in high school. The two were reacquainted when they moved to Nashville -- Warrix in 1996 when he enrolled at Belmont University, and Tolliver in 1998 -- and while Warrix didn't intend to make a career out of performing music, he and Tolliver began performing together at parties and discovered they had similar tastes and influences. In time, Warrix and Tolliver began writing material that combined their taste for both hard-edged rock & roll and heartfelt country story-songs, and they started making the rounds of Nashville clubs. In 2006, Halfway to Hazard got their big break when they were invited to join Faith Hill and Tim McGraw on their Soul2Soul concert tour, and they signed a deal with Mercury Records. Their song "Daisy" became a hit on country radio, and their self-titled debut album was released in the summer of 2007.