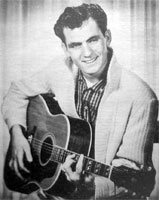 One-hit wonder Larry Hall enjoyed his 15 minutes of fame when "Sandy" reached number 15 on the Billboard pop charts during the first week of 1960. Born June 30, 1940, in Hamlett, OH, Hall first attracted attention as a teen when he won a local talent contest sponsored by country music legend Cliffie Stone. Soon after, he was approached by songwriter Terry Fell (the author of the country classic "Truck Driving Man") with the offer to cut a single for Fell's fledgling Hot Records label. Fell paid Hall all of 50 dollars to record "Sandy," recording the track on hand-me-down equipment acquired from legendary guitarist Les Paul. Hall and his mother drove to record stations across the U.S., imploring programming directors to add the single to their radio playlists, but it did not catch fire until the New York City-based Strand label licensed the song for national distribution, purchasing Hall's contract in the process. The re-released "Sandy" hit radio in the fall of 1959, peaking at number 15 the week ending January 4, 1960. The follow-up "Rosemary" earned little attention, and is arguably more notable for its flip side, "A Girl Like You," an early effort from composer Burt Bacharach. Strand spared no expense in its attempts to galvanize Hall's career, hiring famed producer Jimmie Haskell to helm the majority of the singer's lone LP, Sandy and Other Larry Hall Hits, but he never again returned to the charts, cutting a handful of additional singles for Gold Leaf before exiting show business for good. In the wake of "Sandy," Hall and his family settled on a cattle ranch in Oregon, and he continued operating the ranch until cancer claimed his life on September 24, 1997.