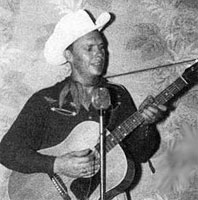 US Rockabilly singer born Homer Raymond Harris, September 7, 1927 in Mantachie (Mississippi). In the history of Sun Records, Ray Harris is but a minor footnote. He only saw two singles released on the little yellow label, but his inclusion in any rock history book is based on the fact that both of those records just happen to some of the greatest and rawest rockabilly ever recorded at Sun or anywhere else in the 1950s. Born in Mississippi, Harris started out as a straight ahead country singer before hearing Elvis Presley and surmising that he could be doing the same thing and reaping every bit of the same share of the rewards. He moved up to Memphis and armed with little more than a burning desire to make it in the record business, put together a small combo with an eye on recording for Sam Phillips and being on Sun Records. The two singles he recorded, "Come On Little Mama" and "Greenback Dollar Watch & Chain" both did brisk local sales but were both too ultimately raw to be heard on radio stations North of the Mason-Dixon line. After playing lead guitar on a few stray sessions at the Sun studio (he can be heard on Jimmy Wages' sessions), Harris defected to the other side of the glass, becoming a successful producer for Hi Records in the late 1950s and early '60s. He died November 13, 2003.