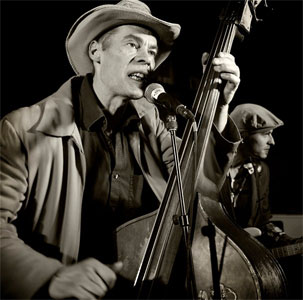 Born in the small town of Castegar, British Columbia, Ronnie Hayward was introduced to an older form of music by his parents, who were a bit older than usual. At the age of nine, the boy began playing the guitar and performing Johnny Cash and Hank Williams songs. At the age of 20, he moved from the guitar to the standup bass. At the same time he relocated to Calgary and attempted to form a rockabilly band. But after moving to Vancouver, he was immediately involved in three bands, but he still continued moving, playing with bands like The Tailgators, Shotgun Shack and Five Star Hillbillies. In 1990, he joined the Nervous Fellas and soon after the Bughouse Five. Hayward stayed with the group from 1991 to 1997. After performing at the 1997 Hemsby Festival in England, Hayward signed to Tail Records and performed throughout Europe as the Ronnie Hayward Trio. The trio released three albums in 1997, including Gotta Git It On and Somewhere Out There. Opening for The Pogues, kd Lang and Jerry Lee Lewis, Hayward returned to Calgary Alberta, performing at the 2000 Calgary Folk Festival. In July 2000, the musician released The Lost Utrecht Sessions, which received much attention and praise among rockabilly critics and circles.