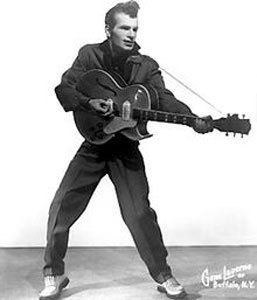 Best remembered for the rockabilly classic "Bluebirds Over the Mountain," singer Ersel Hickey was born June 27, 1934, in Brighton, NY. After the 1938 death of his father, his mother suffered a nervous breakdown and, according to the www.rockabillyhall.com website, Hickey spent his formative years in a series of foster homes, ultimately hitting the road with his sister, an exotic dancer who performed under the name Chicky Evans. He also traveled the U.S. as a carny before settling in Columbus, OH, landing in a juvenile home and singing in a local gospel group. Inspired by Johnnie Ray, in 1951 Hickey entered a Columbus talent contest and took home top honors, winning $500 and committing himself to a career as a pop singer. After discovering Elvis Presley's landmark Sun recordings, Hickey switched his allegiance to rock & roll and in 1955 cut his debut single, the Fine label effort "Then I'll Be Happy."
While performing in Rochester, NY, Hickey stumbled upon Phil Everly and asked for his advice on launching a career. Told "Well, you got to have a song," he wrote "Bluebirds Over the Mountain" literally overnight and traveled to Buffalo the following morning, where he hired photographer Gene LaVerne to shoot a publicity still. The resulting photograph is arguably the zenith of Hickey's career. Rock scribe Peter Guralnick once wrote: "Take a look at the improbably sculpted helmet of hair, the tommy-gun guitar stance, the pleated pants, cocked leg, patent leather casual footwear and turned-up collar...guitar pick poised, background airbrushed out, every fold of clothing carefully arranged...what volumes it speaks of aspiration and style, fate and fantasy, revelation in artifice. It is in effect a self-portrait of rock & roll." LaVerne also put Hickey in touch with songwriter and manager Mike Corda, who immediately booked session time at New York's National Studio; "Bluebirds Over the Mountain" quickly caught the attention of Epic Records, who insisted on releasing the demo in its original mix, fearing re-recording might strip the material of its essence.
Epic issued "Bluebirds Over the Mountain" in January of 1958. Despite the label's enthusiasm, the record reached only number 75 on the Billboard pop charts, and would prove Hickey's biggest commercial hit. A series of Epic releases followed, among them 1958's "Lover's Land" and 1959's "You Threw a Dart" and "I Can't Love Another," before the label terminated his contract in the wake of 1960's "Stardust Brought Me You." Hickey then landed with Kapp, issuing "Teardrops at Dawn" and "Lips of Rose" in 1961 before landing with Apollo to release "The Millionaire" (later covered by Jackie Wilson) the following year. After Apollo went bankrupt, Hickey signed with Laurie long enough to release "Some Enchanted Evening," which would prove his last new recording for four years.
Making ends meet as a songwriter, in 1964 he did pen the Serendipity Singers' hit "Don't Let the Rain Come Down." The Toot label issued his 1967 comeback single, "Blue Skies," with "(Play On) Strings of Gitarro" appearing a year later. He recorded intermittently in the decades to follow, cutting "Oh Lord, Look What They've Done to Your Garden" for Black Circle in 1971, "Waitin' for Baby" for Rameses III in 1975, and "Let Me Be Your Radio" for Parkway in 1982. Later the subject of Bluebirds Over the Mountain, a typically excellent and comprehensive Bear Family retrospective, Hickey died following bladder removal surgery on July 12, 2004.