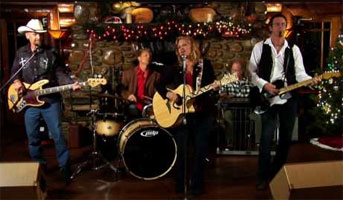 One of the most popular country bands of the late '80s, Highway 101 boasted an influential country-rock sound that helped pave the way for the blockbuster superstars of the '90s. The group was fronted by singer/guitarist Paulette Carlson, a Minnesota native, and assembled by manager Chuck Morris in Los Angeles in 1986. Morris pulled together Jack Daniels (guitar), Curtis Stone (bass, guitar, mandolin), and drummer Cactus Moser, all of whom were seasoned session pros; Daniels and Stone had also worked together as the Lizards. Highway 101 signed with Warner Bros. and issued its self-titled debut in 1987. It was an immediate success, as the first two singles — "The Bed You Made for Me" and "Whiskey, if You Were a Woman" — shot into the country Top Five. The next two, "Somewhere Tonight" and "Cry, Cry, Cry," both went to number one, and seemingly overnight, the group members had become stars. Their 1988 follow-up, Highway 101, Vol. 2, spawned another chart-topper in "(Do You Love Me) Just Say Yes," and three more Top Tens in "All the Reasons Why," "Setting Me Up," and "Honky Tonk Heart." Following 1989's Paint the Town, which contained one further chart-topper in "Who's Lonely Now," Carlson left the band for a solo career in 1990. She was replaced by Nikki Nelson, who debuted on 1991's Bing Bang Boom; however, despite some decent-sized hits, the new version of Highway 101 wasn't quite as commercially successful, and the band soon parted ways with Warner. They signed with Liberty for 1993's The New Frontier, but the album flopped, and Daniels subsequently left the group. He and Carlson temporarily returned to the fold for 1996's Reunited, released on the smaller Intersound label. Curtis Stone and Cactus Moser later formed a new version of Highway 101 with vocalist Chrislynn Lee and guitarist Charlie White, and recorded Big Sky for FreeFalls in 2000. White left in 2002 and was replaced by Justin Weaver.