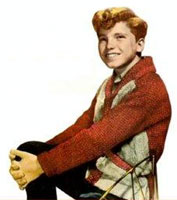 Born March 5, 1947, Hattiesburg, Mississippi, USA. In the mid-50s child star Hodges appeared in television programmes The Jackie Gleason Show and Name That Tune and was seen on Broadway 405 times in the hit musical The Music Man. In 1959 he starred alongside Frank Sinatra and Edward G. Robinson in the film A Hole In The Head and can be heard on Sinatra’s hit from the film, ‘High Hopes’. He also had a major role in the film of Huckleberry Finn, starred with Hayley Mills in Summer Magic and even had his own television show, The Secret World Of Eddie Hodges. His youthful revival of the Isley Brothers’ ‘I’m Gonna Knock On Your Door’ on Cadence, not only took him into the US Top 20 in 1961 but also gave the 14-year-old an Australian and Canadian chart-topper and a small UK hit. He returned to the US Top 20 with an endearing song written by Phil Everly, ‘(Girls, Girls, Girls) Made To Love’ in 1962. He had releases on Columbia Records in 1963 and MGM Records in 1964 before ‘New Orleans’ on Aurora in 1965 gave him his last US chart entry. It seems that, for Hodges, maturity brought a halt to his recording career.