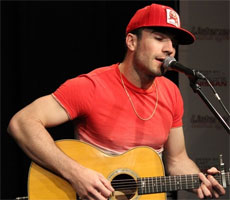 Country singer/songwriter, guitarist, and pianist Sam Hunt was born and raised in rural Cedartown, Georgia, where he was a gifted athlete and had a fine career as a college quarterback at both Middle Tennessee State University and the University of Alabama at Birmingham. Although he was good enough to be signed as a free agent for a time with the Kansas City Chiefs, Hunt was drawn increasingly to music. He had grown up on, and loved, 1990s country, and after hearing all manner of rap, R&B, and other urban pop styles in college locker rooms, he developed a singing and songwriting style that gently blended all of this, and he headed off to Nashville, ground zero for hopeful country songwriters, to begin his career. Quickly signed to a publishing deal, he applied the self-discipline he learned as an athlete, and began writing better and better songs, finally breaking through when songs he wrote or co-wrote were recorded by country stars Kenny Chesney ("Come Over," which went on to become a number one single), Keith Urban ("Cop Car"), Billy Currington ("We Are Tonight"), and others. Hunt made his commercial recording debut when he independently released a single, "Raised on It," in 2013, followed by a 15-song demo mixtape called Between the Pines that same year, also independently released. Hunt signed a recording deal with MCA Nashville early in 2014, and the label released a single, "Leave the Night On," that same year in advance of an album. "Leave the Light On" became a big hit, peaking at three on the Billboard country singles charts and thereby effectively setting the stage for the October release of Hunt's debut, Montevallo.