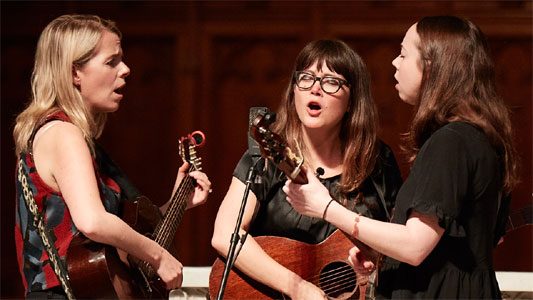 The modern folk super trio of Sara Watkins, Aoife O'Donovan, and Sarah Jarosz dubbed themselves "I'm with Her" long before Hillary Clinton adopted the phrase as her 2016 presidential campaign slogan. Watkins, O'Donovan, and Jarosz played a spontaneous show at the 2014 Telluride Bluegrass Festival in 2014, which prompted the trio to travel the globe in 2015, releasing the single "Crossing Muddy Waters"/"Be My Husband" in the interim. Following a 2016 respite when the three musicians pursued their own projects, they reunited in 2017 to record a full album with producer Ethan Johns at Real World Studios, releasing the finished See You Around in February 2018.