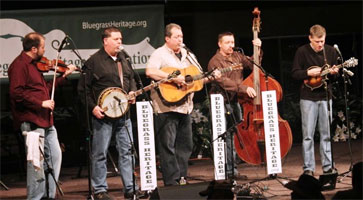 IIIrd Tyme Out is one of the leading bluegrass Vocals groups of the 1990s. Formed in 1991 by lead vocalist and guitarist Russell Moore, fiddler Mike Hargrove, and bass vocalist and electric bass player Ray Deaton, shortly after they left Doyle Lawson & Quicksilver, the Georgia-based quintet has received numerous Vocals Group of the Year awards from the International Bluegrass Music Association (IBMA) and the Society for the Preservation of Bluegrass Music in America (SPBGMA). While most of their repertoire centers around the bluegrass and country songs of Bill and Charlie Monroe, the Delmore Brothers, the Carter Family, Hank Williams, and Jimmie Rodgers, the group has been equally effective with gospel material. Their 1996 album, Living on the Other Side, was an all-gospel recording that included the Lester Flatt tune "I'm Working on a Road to Gloryland," with guest Earl Scruggs on guitar. The song became a Top Ten country hit and was named Song of the Year by the IBMA. In addition, IIIrd Tyme Out was named Best Contemporary Gospel Group by the SPBGMA in 1997 and 1998.
Strengthened by the soulful singing of Moore, a three-time winner of the SPBGMA's award for Best Contemporary Male vocalist and the recipient of the IBMA's award as Best Male vocalist in 1994 and 1997, and the deep Vocals tones of Deaton, IIIrd Tyme Out is the product of a group effort. Mandolin player and harmony vocalist Wayne Benson replaced Alan Bibey and banjo player Barry Abernathy replaced Terry Baucom shortly before the band recorded their third album, Grandpa's Mandolin in 1993. Abernathy was subsequently replaced by Steve Dilling. IIIrd Tyme Out continues to set the pact for bluegrass singing. The group was named Vocals Group of the Year by the IBMA in 1998, returning in 1999 with John & Mary. Plus, two live albums, 1998's Live at the MAC and 2001's Back to the MAC, were also popular items with both fans and critics. 2004 saw the release of The Best Durn Ride while 2006 brought yet a third live album, Round III at the Mac.