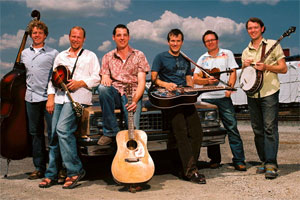 Formed in 2005, the Nashville-based acoustic group the Infamous Stringdusters balance a fluency in old-timey bluegrass and indie jamgrass sensibilities, with an emphasis on strong instrumental work plus a sound that's both organic and groove friendly. The band earned a stellar reputation among bluegrass fans right out of the box, earning three International Bluegrass Music Association awards after the release of their 2007 debut album, Fork in the Road, and they began exploring a more ambitious musical approach with 2010's Things That Fly. The Stringdusters' genre-spanning approach got a workout on 2016's Ladies & Gentlemen, in which they collaborated with 11 different female guest musicians, and they earned one of the music business' highest honors for 2017's Laws of Gravity.
While the Infamous Stringdusters were founded in Nashville in 2005, three of the founding members -- Andy Hall on Dobro, Chris Eldridge on guitar, and Chris Pandolfi on banjo -- knew one another from their days attending the Berklee School of Music in Boston. When Hall relocated to Nashville to join Ronnie Bowman and the Committee, Eldridge and Pandolfi soon followed. Hall, Eldridge, and Pandolfi continued to make music together, and two members of Bowman's group began joining in, Jesse Cobb on mandolin and Jeremy Garrett on fiddle. With the addition of bassist Travis Book, the pickers began playing out as the Infamous Stringdusters, and it wasn't long before they attracted the attention of noted bluegrass label Sugar Hill Records.
The debut album from the Stringdusters, Fork in the Road, was released in early 2007, and at that years' IBMA awards, they were named Emerging Artists of the Year, while the LP won Album of the Year and its title track took the honors for Song of the Year. A self-titled sophomore release followed in 2008, by which time Chris Eldridge had left the group, with Andy Falco taking his place on guitar. A third album, Things That Fly, arrived in 2010, and found the Stringdusters stretching out creatively and featuring guest vocalists Dierks Bentley and Sarah Siskind. A track from the album, "Magic #9," was nominated for a Grammy Award as Best Country Instrumental Performance.
In 2011, Jesse Cobb dropped out of the band, and the Stringdusters continued on as a five-piece; one of his final appearances with the group was on the concert album We'll Do It Live, which was released by the group's own High Country label. Two more studio releases on High Country followed, 2012's Silver Sky and 2014's Let It Go. (The former album was also issued in a special edition that included a bonus disc of live material.) Undercover, an EP in which the group put their own spin on songs by Johnny Cash, Tom Petty, and Pink Floyd, among others, appeared in 2015.
In 2016, the Infamous Stringdusters struck a deal with Compass Records, which brought out Ladies & Gentlemen that year. It was an ambitious set that featured collaborations with 11 noted female musicians, including Joan Osborne, Lee Ann Womack, Mary Chapin Carpenter, Joss Stone, and Claire Lynch. The group quickly returned to the studio and had another album, Laws of Gravity, ready for release in January 2017. The Stringdusters took home a Grammy Award for Laws of Gravity, which was declared Best Bluegrass Album of the year; 2017 also saw the group release Laws of Gravity: Live (a collection of concert recordings of material from the album) and Undercover, Vol. 2 (another EP of cover tunes). November 2018 brought yet another concert album from the Infamous Stringdusters, Live from Telluride, and in 2019 the group issued the studio LP Rise Sun.