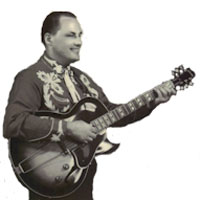 Ralph Johnson was born in the Clinch Mountains of south West Virginia.  He began developing his musical career at the age of six, after receiving his first guitar.  At the age of fifteen, his singing and musical talent had developed enough to enable him to put together his own band.  Ralph and his band auditioned for a radio show in Richlands, VA. They landed the job on WRIC radio.  During this time, his band played schools, halls and theatres in the area.  They later auditioned for a spot on a new TV station in Bluefield, WV.  Some time later, they had earned the privilege of performing two shows on WOAY in Twin Oak Hill, WV.  It was here that he recorded his first record, « Henpecked Daddy« .  After appearing on different radio and TV stations throughout the country, he moved his operation to Baltimore. MD.  While in Baltimore, he launched Wedge Records, Dome Records and Fleet Records.  Along with all of his record labels, he opened his own publishing company, Big Wedge Music.  He released all types of music from the Washington and Baltimore areas.  He later moved his operation to Vineland, NJ where he became the co-owner of WDVL Radio.  As a DJ, he played country music five hours a day, every day.  He went on to develop and book country music acts from Nashville, TN into Palentein Park every Sunday.  In 1976, he decided to move to Nashville, TN, where he proceeded to record and promote records on his Wedge Entertainment record label.  He used songs from his own publishing company, Big Wedge Music.