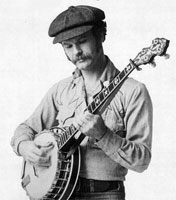 Bill Keith had great impact on modern banjo playing, particularly in the direction of "newgrass." He even had a picking style informally named after him.
Born in Boston, Massachusetts, Keith began taking banjo lessons at a young age, and also learned to play piano and ukulele. During adolescence, he played in a few Dixieland bands, but by the late '50s, became interested in folk music after listening to such inspirational artists as Pete Seeger and Earl Scruggs. Using instruction books, the Amherst college student began learning their two different styles. Eventually, Keith began developing his own unique style, which became known as the melodic, chromatic or "Keith" picking style. This distinct technique was borne of his desire to play fiddle melodies on his instruments. In 1958, he teamed up with fellow Amherst student Jim Rooney and began playing at local coffeehouses and on campus. Eventually they hooked up with promoter Manny Greenhill; with his assistance they founded the Connecticut Folklore Society, which sponsored a series of traveling campus concerts throughout New England.
Following graduation and a brief stint in the US Air Force Reserve, Keith began learning to make banjos with Tom Morgan. Later he, Rooney, mandolin player Frank Wakefield, and guitarist Red Allen formed the Kentuckians. In 1963, Earl Scruggs contacted Keith to lay out the tablature for the instructional book Earl Scruggs and the 5-String Banjo. Later that year, Keith and his former Amherst classmate Dan Bump developed a new kind of tuning peg that was adopted by Scruggs who provided a name for the resulting company in 1964. In the mid-'60s, Keith joined Bill Monroe's Blue Grass Boys, where he was listed as Brad Keith. He left the band after only eight months to do more session work and by the year's end had joined Jim Kweskin's Jug Band where he would stay for four years. After that he played with the Blue Velvet Band. He abandoned the banjo for a while in 1968 to become a pedal steel guitarist. In 1970, Keith moved to Woodstock, New York, and spent a year with Jonathan Edwards. He then went on to work with Judy Collins. He and long-time cohort Rooney also toured together in both the U.S. and in Europe during the '70s and '80s, with Keith developing a particularly large following in France. When back home in Woodstock, Keith began playing banjo for the Woodstock Mountain Review. In 1977, he worked briefly as a columnist for Frets magazine. Later, in 1989, Keith, Rooney, Eric Weissberg and Kenny Kosek re-formed their old group, calling it the New Blue Velvet Band. Keith has remained intermittently active in performing and recording during the new millennium, with guest appearances on albums including Beausoleil's Alligator Purse released in 2009, and he has also issued instructional booklets with accompanying CD/DVDs. Bill Keith died October 23, 2015 in Woodstock (New York).